“Through participation in Concours, students develop confidence and improve their French but as well their skills in time management, listening and critical thinking. Ultimately they become more effective as communicators, capable of inspiring others,” said Diane Tijman, President of Canadian Parents for French – BC & Yukon. “We are so proud of all our Concours participants. Bravo à vous tous et toutes pour votre belle participation!” she added.

Bonne chance to Matthew Wilson who will be going on to represent BC in the upcoming National Concours d’art oratoire competition for senior secondary students in Ottawa-Gatineau, Saturday June 3rd, 2017!

On April 11, 2017, North Vancouver students took to the podium to demonstrate their French language skills as part of the annual Concours d’art oratoire, hosted by the North Vancouver School District and the North Vancouver chapter of Canadian Parents for French. Every year, students from throughout the school district take part in this well recognized French public speaking competition. Students hone their oral French and public speaking skills to compete first at the school level and then, for the winners from the schools, at the district finals. District level winners will then earn a spot to compete at provincials (May 6, 2017 in Surrey, BC). Secondary level students who win top spots at Provincials will travel to the national capital area to compete for scholarships and other prizes in the CPF’s National Concours competition on June 3 in Gatineau, Quebec.

2017 North Vancouver School District finalists:
The complete list of finalists who moved onto Provincials can be found here.

Félicitations to all the competitors and un grand merci to all the parents, NVSD teachers, CPF volunteers and sponsors who help make Concours a very special event every year!

“In addition to the cultural and language benefits, Concours d’art oratoire helps students develop their creative and public speaking abilities, as well as self-confidence,” said Patti Holm, President of Canadian Parents for French BC & Yukon.

“It’s an incredible feat to make it to the Provincial finals — taking home a medal is a real achievement. We congratulate everyone who participated; they are all winners. Félicitations!” added Concours d’art oratoire chief judge, Dr. Renée Hamilton-Clark.

This year marked the 33rd anniversary of the Canadian Parents for French BC & Yukon sponsored Concours d’art oratoire. The provincial finals were hosted Saturday, May 7th at SFU Surrey. 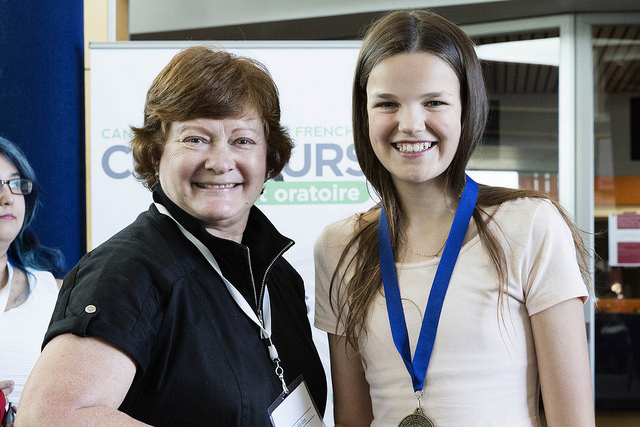 The district finals were attended by 38 students from 10 schools and parents, teachers, administrators, SD44 staff, community judges and CPF North Van volunteers over a two-day period.  District Finals are part of CPF’s national Concours event that involves over 80,000 children from across the country. Winners from the district competition will go on to compete with students from across BC in the Provincial Concours d’art oratoire held at SFU Surrey Campus on Saturday May 7th 2016. Grade 12 provincial winners have the opportunity to go on to travel to the National Concours (in Gatineau, Québec on May 28, 2016)  to compete for university scholarships and many other prizes.

We are proud of the effort and dedication of all students who competed in the district finals.  The speeches were very well-written and well-presented to an audience of the students’ peers, teachers and parents, in the lovely setting of the Oceanview Room at the Education Services Centre. Many thanks to NVSD44 for once again hosting this wonderful event.

“I was blown away, once again, by the powerful speeches the students delivered. Not only did their French language skills shine, but they spoke to issues that are really important to them. They were able to convey their passions while utilizing their French,” said Emina Dervisevic, president, North Vancouver chapter of Canadian Parents for French.

THANK YOU TO OUR SPONSORS

The North Vancouver Chapter of Canadian Parents for French would like to thank the following local businesses for their generous support of the Concours d’art oratoire:

The Concours d’art oratoire is a long-standing CPF tradition in the North Vancouver School District. At the District finals (April 13-14, 2016), students in grades 6 through 12 from across the school district, will deliver the speech that won them first prize at their school. The winners from the District finals will then advance to the Provincial finals at SFU, Surrey Campus on May 7th. Senior high school students will then have a chance to attend the National finals in Gatineau, Québec on May 28th. The CPF Concours d’art oratoire offers hundreds of prizes to participants: university scholarships, trips to Ottawa, books, medals, merchandise, cash and more.

SCHOOL COMPETITIONS
From February to April, Grade 6 to 12 teachers hold class competitions with all students participating if desired. Many teachers make Concours part of the curriculum.

DISTRICT FINAL
Winners from the school competitions will participate in his year’s District finals, which will take place over two days: April 13th and 14th, 2016 at the Education Services Centre, 2121 Lonsdale Avenue.

PROVINCIAL FINAL
Winners for each grade at the District level will proceed to the Provincial competition which takes place on Saturday, May 7th, 2016 at SFU Surrey Campus. Grade 12 winners will advance to the National Final, held in Gatineau, QC on May 28, 2016.

NATIONAL FINAL
On Saturday, May 28, 2016, Canadian Parents for French will host the 14th annual public speaking competition, the National Concours d’art oratoire 2016, in Gatineau, Quebec. The competition brings together senior high school students from across Canada who will deliver the speech that won them first prize at the school, regional, and provincial/territorial levels.

Photos from 2015 Provincial Competition
240 students converged on SFU Surrey on May 2nd, 2015 to compete in the provincial Concours d’art oratoire competition. This Flickr album features the winners from each category.

Find out more about the Concours experience in this video, made at Provincial Concours 2013

Click here to view the June 2015 Chapter Update from CPF BC/Yukon. Chapter Updates are a way for CPF BC/Yukon to connect with CPF chapter volunteers on a monthly basis but they also contain useful information that is relevant to anyone with a connection to children learning French in British Columbia!

And North Vancouver gets a nod in Chapter Happenings, click on the image below to have a look! 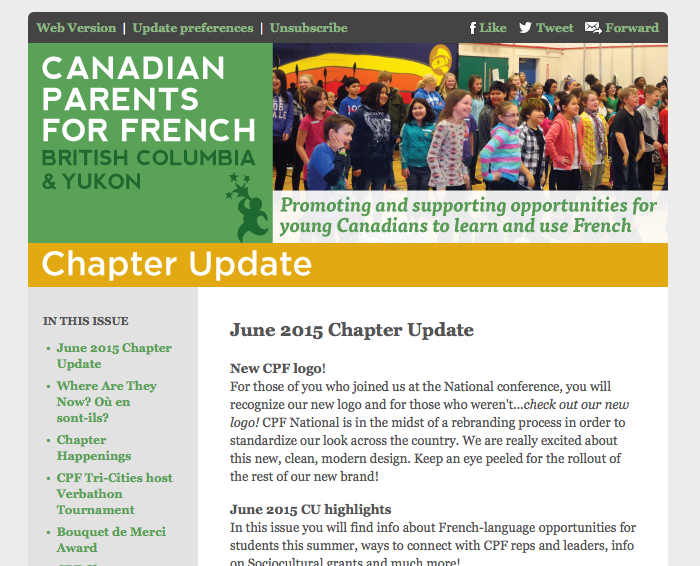 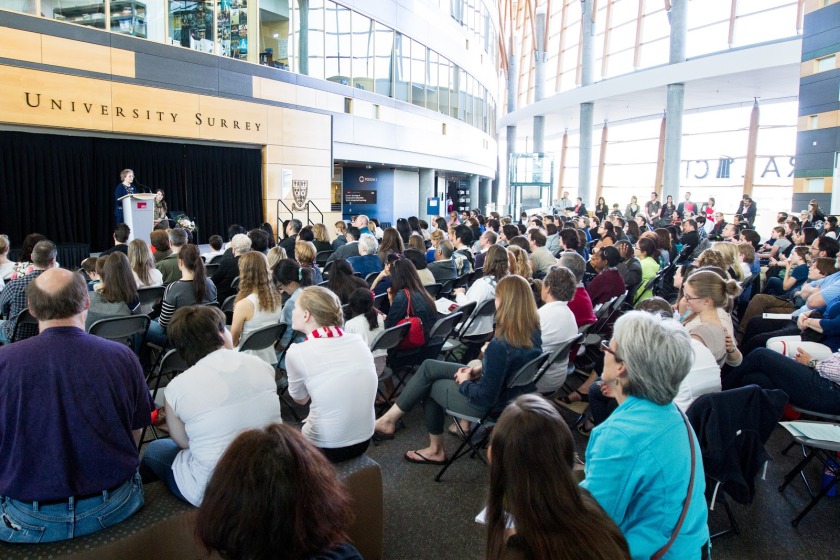 Over the past few months, 10,000 students from across British Columbia competed, 240 made the provincial finals, and 69 students across BC took home top awards in this year’s pan-provincial French public speaking competition, Concours d’art oratoire.

This year marked the 32nd anniversary of the Canadian Parents for French BC & Yukon-sponsored Concours d’art oratoire. The provincial finals were hosted Saturday, May 2nd at SFU Surrey.

We are extremely proud of North Vancouver students for their incredible work, as they led the way in winning the top awards for this year’s Provincial French Public Speaking Competition! 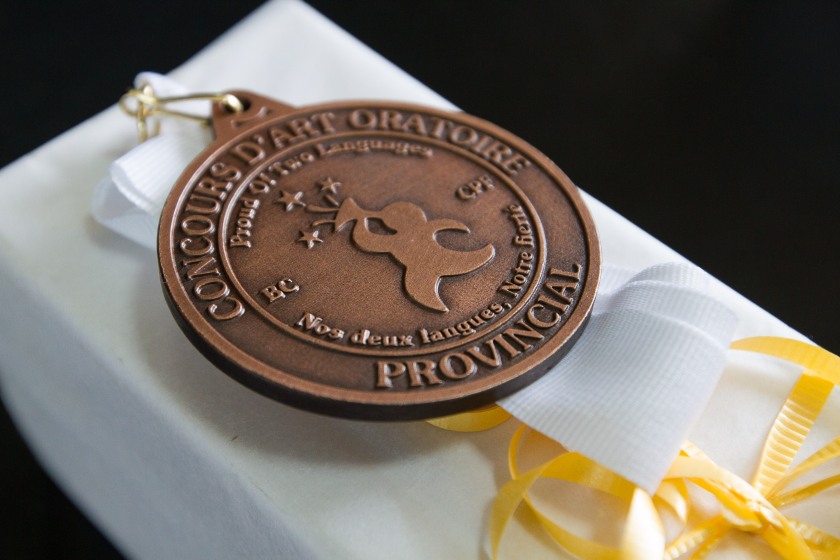